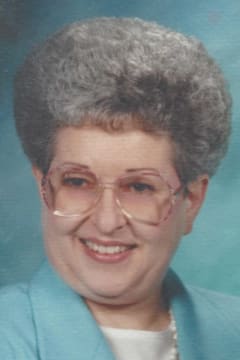 Ginny is survived by her husband Steve, one daughter Robin (Grimes) and son-in-law Tom Jackson of Raymore MO, two grandchildren, one sister Maril-Lee (Demler) Wolford of Gardner KS, and numerous cousins, nieces and nephews. Preceding her in death were her parents, Henry and Ethel Demler of Burlington KS, and three sisters, Ruth Wollen of Topeka KS, Violet Hollenbaugh of Newville PA and Louise Hess of Burlington KS.

Ginny was born on October 6, 1946 in rural Burlington KS to Henry and Ethel (Strawder) Demler. She graduated from Burlington High School in 1963. Ginny also attended Manhattan Christian College for two years. She married Stephen (Steve) T Grimes on October 7, 1967. Steve graduated from OSUIT in Okmulgee OK in 1968 after which they moved to Independence KS. In Independence, Ginny volunteered at the Midwest Pregnancy Care Center. After a number of years as a volunteer, she accepted the position as Director of the center. She worked at MPCC for a total of 25 years until her retirement at the end of 2010. Ginny’s greatest joy was being able to work with, support and encourage the young women through MPCC. After retirement, she and Steve moved to Harrisonville MO to be closer to their daughter and her family.

Cremation has taken place and a celebration of life service is scheduled for Monday, February 1, 2021, at 10:00am at the Worship Center located at 2901 N State Route 291, Harrisonville MO. Pastor Jason Murry will officiate the celebration. All are welcome to attend to celebrate Ginny’s life. For those unable to attend, the service will be streamed online to Steve’s Facebook page. In lieu of flowers, contributions are suggested to the Worship Center (PO Box 467, Harrisonville MO 64701). Condolences may be sent to Steve Grimes (909 Mission Rd, Harrisonville MO 64701).