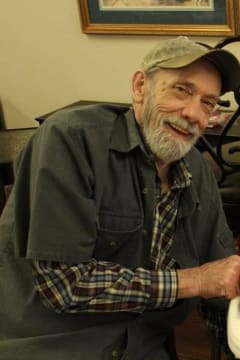 During Tom’s formative years, he spent time with his father and step-mother, his paternal grandparents, and some time was spent in the foster care system. Despite his many obstacles and struggles growing up, he managed to graduate high school in 1965 while also working part time to help his family out.

Tom always knew he would be a family man. In 1967 he married Dorothy Jean Brock who he had one daughter with, Misty Dawn [David] Maloney. After that marriage ended, Tom met Vicky Lynn Pippin while she was working at The Lamp Post Bar in Joplin, MO. Vicky had two daughters, Melissa Day (deceased) and Kimberly Day, who Tom took in and raised as his own. Tom and Vicky share a daughter, Tonya Jones. They were married from 1975-1987.

In the late 60s after his first divorce, Tom moved from the Wichita, KS area to Joplin, MO. He met a man named Bob Parrish who owned a furniture store, Bob’s Furniture on Main St., and began delivering merchandise for him. It was during his marriage to Vicky that Tom decided he needed a career that would provide benefits to him and his family. In 1978 he began his career as a machine welder at Modine Manufacturing. He was a dedicated employee until his retirement in 2007. Tom couldn’t quite get enough of the place and gave them some part time work until 2008.

Most people may remember Tom as a single father raising his granddaughter. In 1992, Tom was granted guardianship of his two-year-old granddaughter, Tomiah [Brett] Robertson. He raised her as his own and provided her the best life. He was able to see her graduate, get married and have children of her own. Tom would move mountains for Tomiah and her children: Marric, Hadleigh and Pogue Robertson.

Tom wasn’t just a hard worker and family man. He also knew how to have fun. Those who knew him would remember how skilled he was at bowling and billiards. Tom has many trophies from his years spent playing the games. He spent a lot of time at The OK Bar in Joplin, MO cultivating his talents on their pool tables. Tom also loved being outdoors; camping, fishing, and canoeing are just a few outdoor activities he enjoyed.

It was St. Patrick’s Day in 2009 when Tom’s health first became an issue. He had a heart attack and was rushed to surgery. He came out with a different perspective and wanted to get healthier. He began his journey to quit smoking. Unfortunately, he didn’t start the journey soon enough and in November of 2009 he was diagnosed with stage 4 COPD. He spent the next several years having numerous health scares. He had a brief bladder cancer scare in 2012. He spent the time with his family and friends, making all the memories he could. His body succumbed to the disease of COPD and heart failure on Friday, June 17, 2022. He died peacefully at home with his granddaughter and great-grandchildren.

Tom is survived by numerous grandchildren, great-grandchildren, nieces, nephews and cousins who we sadly do not have the room to mention. Tom also has many friends/co-workers he was very fond of. We will have a celebration of life in Tom’s honor at The OK Bar & Billiards, 1500 S. Main St, Joplin, MO 64804 on July 10, 2022 at 2:00PM.