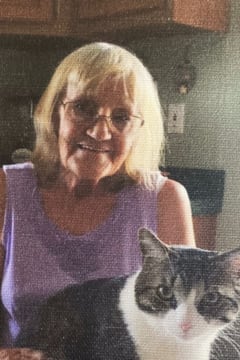 Marla (Russ) Yonkman died unexpectedly at home on September 1, 2021 in Belton, Missouri at the age of 85.

Marla was born on March 11, 1936 in Cadillac, Michigan to Laurison and Beverly Russ. She married Robert D. Booth, who passed away in December 1954. She later married Kenneth Yonkman in 1957. Marla lived in Cadillac, Michigan, Denver, Colorado, Amarillo, Texas and Denison, Texas; she also spent a year in the Phillippines where her husband was stationed with the Air Force. Marla began working for King Radio after moving to the area and later retired from there. She also worked for DS Bus Lines as a bus monitor at the time of her death in Belton, MO.

A Celebration of Life will be held at a later date.