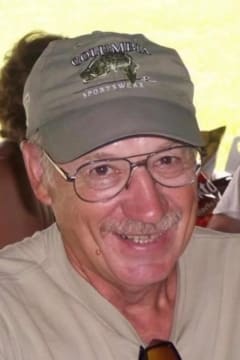 Leslie ‘Les’ Parris, 76, of Harrisonville, MO passed
away from his earthly life unexpectedly on September 5, 2022, at his home.

The family of Leslie Parris will receive friends from 10:00 -10:45 a.m., Saturday, September 17, 2022, at Faith Baptist Church (23705 MO Hwy 2, Harrisonville, MO 64701). Funeral services will follow at 11:00 a.m. at the church with Pastor Robert Hutchinson, officiating. In lieu of flowers, you are welcome to contribute to Faith Baptist Church in memory of Leslie Parris.

Les was born October 16th, 1945 in Kansas City, Missouri. He was the oldest child of Homer and Nyla (Milican) Parris. His dad was a Navy pilot, later becoming an officer, and was away at the time of his birth. Growing up in a Christian home, Les learned to love the Lord and became a Christian between 8 & 9 years old at Hickory Grove Church in Pleasant Hill, MO. Growing up on a farm with milk cows meant that Les would wake up before dark to milk the cows and then head to school.

Les’s love of hunting started at an early age when he got his first rifle at 9 years old. He would lose track of time in the woods until he heard the signal to bring him home. Since he also ran traps, his mom never knew what he would bring home.
Les attended Pleasant Hill High school where he played football and graduated in 1963. Les did not neglect his love for sports and played in the church softball league as well as on a men’s town team. He coached the ladies’ church softball team and helped coach little league football. Later in life, he took up golf. He was an avid follower of Harrisonville Wildcats.

Les wanted to join the service but was only 17 years old at the time and too young. He then began working at General Motors, retiring after 30 years. After retirement from GM, he began working at Hearst Marion Laboratory until leaving them to work full time in Parris Lawn Care which he had started on the side. Parris Lawn Care kept growing and became a family operation allowing two generations of boys in the family to join in teaching them a work ethic and the need to do some mission efforts.

Les and Carol (Jackson) Parris were united in marriage for 43 years and were active members of Faith Baptist Church where Les served his Lord in many different capacities.

Gone before him were his father, Homer Parris, and his son, Slade Jackson.