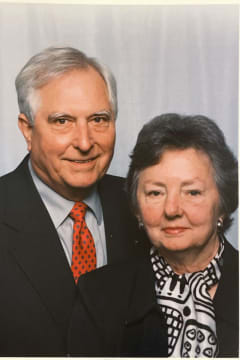 He graduated from Orrick High School in Orrick, Missouri in 1946, followed by graduation from William Jewell college in 1950, where he was a member of the Sigma Pi Sigma and Sigma Nu fraternities. He later added a master’s degree in Electrical Engineering from Johns Hopkins University.

Karl was drafted into the Army during the Korean War. After attending OCS, he was commissioned as a First Lieutenant. Karl was stationed at Redstone Arsenal in Huntsville, Alabama. He served in the reserves until the 1960's.

While serving in the Army, Karl married Anne Ferril on June 10, 1951. They were married for over 61 years until her death in 2012. They are survived by three sons: Karl Randall (wife Nancy), Gary Ferril (wife Debbie) and Lee Edward Shade (wife Helen).

Upon leaving the Army, he went to work for the Applied Physics Laboratory of Johns Hopkins University in Maryland. He retired from there in 1988.

A memorial service is planned for a later date.

In lieu of flowers, donations can be sent to Arley United Methodist Church.