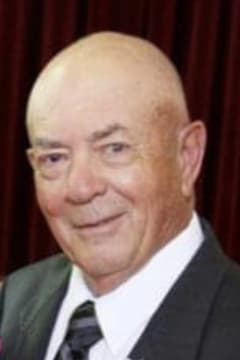 Forrest Ellis Webster, of Harrisonville, MO, went to be with his Lord and Savior on October 10th, 2022.

Forrest, known as F.E. or Ellis by most, was born to Dale and Margaret Webster on January 27th, 1930, in Cass County. Ellis attended Harrisonville High School, graduating in 1948. He then served in the United States Navy, where he maintained the ships logbook.

In 1951, after his return to Harrisonville, he married Gracie May Sulser, at the First Christian Church of Harrisonville. They were blessed with two daughters, Jamie and Tammie.

Ellis served as a rural mail carrier for 32 years, in addition to farming 140 acres of property in Cass County. He was well known through the area as he was never one to shy away from a conversation. Ellis, up until his last weeks, enjoyed telling his life stories and offering advice. Ellis enjoyed three things more than anything else during his time with us: the outdoors, his friends and family, and his beloved wife Gracie May.

Ellis was an avid outdoorsman throughout his entire life, and it would be a disservice to not mention that the deer and turkey of Missouri lost one of their most formidable adversaries with his passing. Ellis was also no stranger to the golf course, where he worked and spent a lot of his time after retiring from the post office/farming. Those of us that knew him well, also know there was nothing the man could not fix with a roll of duct tape and some #9 wire.

Ellis was preceded in death by his father, mother, his beloved wife Gracie, and his eldest daughter Jamie Sue Lee.

A visitation will be held at the First Christian Church of Harrisonville, MO on Oct. 20th beginning at 4:00pm with the formal service starting at 6:00pm.