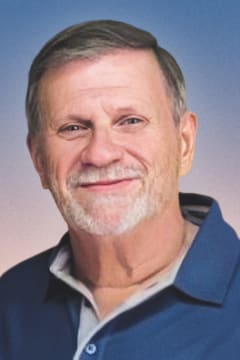 Clarence Daniel (Dan) Landrum, 70, of Belton, Missouri passed away on Wednesday, June 1st, 2022 at home after fighting a brave battle against brain cancer for the past 5 months.

On July 18, 1951, Dan was born in Chicago, Illinois to the late Erma and French Landrum. On June 26th, 1976, he married Christine Kilian in Kansas City, Missouri.

Dan was a self-made entrepreneur and started one of the biggest flooring retail companies in Cass County from scratch. For 41 years, he owned Carpet for Less. Dan was also an active member of the Belton Chamber of Commerce and a strong supporter of local business. He appreciated the business acquaintances he befriended over the years.

For the past 38 years, Dan was a proud member of the Belton-Grandview Masonic Lodge #450. He was always involved with his children’s activities including coaching softball, baseball, and Tae Kwan Do. Always had a love for his dogs.

He loved spending time at the lake with his family and friends, listening to Jimmy Buffet, Van Morrison, Billy Joel, and many others. Not only would you listen to the music with him, but he would make sure that you knew exactly what the lyrics meant in the song and any backstory that went with it. Later in life, Dan became an avid BBQ’er and would smoke meat for all those around.

Dan was a mentor to many and had love for those closest to him. A patriarch to all those in his family. A true legend.

He is survived by his wife of 45 years, Christine; daughter, Melissa Foster and her husband, Aaron; son, Justin (JD) and his girlfriend Erin Bandelier; and his very beloved granddaughter, Brooklyn Foster. He is also survived by; Doug Landrum and his wife Donna; sister, Sandra Leon and her husband Luis; sister Judy Mariner and her husband Mike; and several nieces. Dan was a devoted husband, father, grandfather, and a loyal friend to many.

A Celebration of Life will be on Saturday, June 25th from 1pm - 4pm, at Centerview in Raymore, Missouri with a Masonic Service at 2pm. In lieu of flowers, donations are to be made to the Masonic Home of Missouri in honor of Dan Landrum. (https://www.mohome.org/donate)

And now the end is here
And so I face that final curtain
My friend I’ll make it clear
I’ll state my case, of which I’m certain
I’ve lived a life that’s full
I traveled each and every highway
And more, much more
I did it, I did it my way