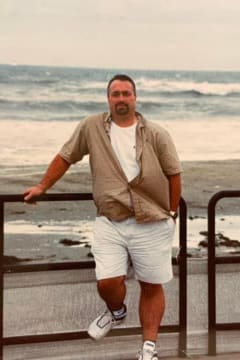 Michael Lloyd Kear of Lee’s Summit, MO, was born February 3, 1968, in Denver, Colorado, the son of Charles Burns Kear and the late Linda Sue Smith. Michael departed this life Friday, January 28, 2022, at the age of 53 with his loving family by his side. Michael was preceded in death by his mother and grandparents.

Michael grew up in the suburbs of Denver and was a 1986 graduate of Aurora Central High School. Michael was an exceptional football player and played center for the Trojan football team. He later went on to play center for Nebraska Wesleyan University. After attending college, Michael went to work at the Toys R Us Distribution Center in Denver and was later transferred to the newly built distribution center in Lee’s Summit, MO where he worked as a department manager for 20 plus years. He later retired due to the decline of his physical health.

Next to football, Michael’s favorite sport was snow skiing. Michael and all of his buddies from Colorado would take a ski trip every year in February to celebrate their birthdays. He also enjoyed playing tennis and racquet ball after work with his friend Corey.

In February of 1999, Michael decided to ask his co-worker, Angie, out on a date. After a couple of months of dating, they realized they were meant to be together forever. The first five years, they did everything together. They loved to travel to the coastal cities so they could enjoy the beautiful ocean scenery and the finest seafood you could eat. They loved going to NASCAR races, football games and riding their jet skis on the lake.

Michael and Angie became parents and were blessed by a son in 2004 and a daughter in 2011. Michael’s two children were his entire world. He made sure they had everything they needed in life. He spent most of his time attending his son’s football and baseball games, his daughter’s softball games, and their school functions, as well as taking them to arcades, to Branson to ride go-carts, to fish at James A Reed, and many more fun vacations together.

Michael is survived by the love of his life Angie Neill and their children Tyler and Tori Kear of Lee’s Summit; his father Charles Kear and wife Joy of Lolo, Montana; his sister Samantha McKissick and husband Joe of La Vista, Nebraska; his brother Travis Kear and wife Laura of Thornton, Colorado; many nieces and nephews; two great-nieces; and other relatives and friends.

Cremation has been accorded.

A Celebration of Life will be held at a later date. The date, time and location will be published by the family when that information becomes available.

Memorial contributions for Michael’s children are suggested to: Michael Kear Memorial FBO Kear Family and may be sent in care of Community America Credit Union.